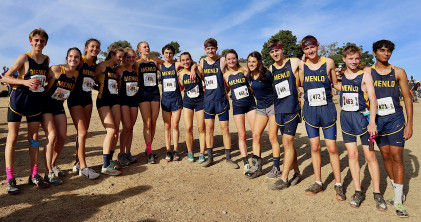 The trailblazing cross-country team continues to raise the bar. Not only have the Knights set school and league records in recent years, they have had more athletes participating than ever.

In 2018, the  girls’ team brought home the first section championship and the first one in program history since the boys won in 1997 and 1998. The girls advanced to the state meet and finished 11 in Div. IV.

th among 25 Div. IV teams. The girls defended their title at the league championships with all seven placing in the top 16. The boys took sixth and sent two to CCS.

The 2016 girls became the first cross country team in school history to advance to the state meet then took top-20 finishes. Both the boys’ and girls’ teams qualified for the CCS Championships in 2017 and 2014. The boys’ team won back-to-back West Bay Athletic League titles in 2009 and 2010—its best finish since winning five consecutive from 1996-2000.

The goal of the program is to encourage all student-athletes to discover the pleasure and benefits of running and is geared to the needs of each individual.

Chen has led the charge in taking the Knights to the state level and generating high participation numbers in the sport for Menlo.

In 2019, Menlo’s longtime cross country, track & field coach and assistant soccer coach, won a Positive Coaching Alliance’s National Double-Goal Coach® Award for his positive impact on youth sports and was one of four to be recognized at the National Youth Sports Awards.

Chen, who is also Menlo’s track & field head coach, has developed a successful middle school cross country and track program. He has served as Menlo’s assistant coach for the varsity girls’ soccer team. He was honored by Menlo in 2009 with the Bagshaw Family Award for Coaching Excellence. 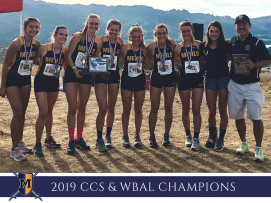