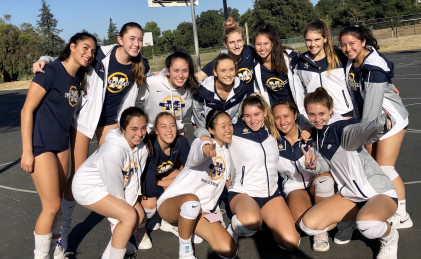 Menlo volleyball has been selected to the top tier of the Central Coast Section each year since the Open Division’s inception in 2016.

Defending its West Bay Athletic League title, the Knights are coming off a perfect 10-0 season.

The Knights made school history when it won a sixth NorCal title and its first state championship in 2016. In 2013, Menlo won its eighth Central Coast Section title in school history and its first CIF NorCal championship in 12 seasons before moving to the state final. Menlo won five of nine league titles from 2001-2005 and four consecutive from 2012-2015. The Knights have received American Volleyball Coaches Association Team academic awards in 2007-2009 and 2014.

Holland has worked as an assistant varsity volleyball coach for the past six seasons, the last three under Marco Paglialunga, who returned to Italy to lead the U24 national team in the world games. During those six seasons, Menlo volleyball made program history. After becoming NorCal champions in 2013 then again three years later, the Knights won their first state championship in 2016.

In 2013, the Knights won the CCS Div. IV Championship then won a NorCal title for the first time since 2002. Menlo volleyball has won five league titles in the past six seasons.

Holland not only is a seasoned high school coach, he also has been a club coach for nearly a decade. He has directed teams with players from 12 years old through elite 18s.