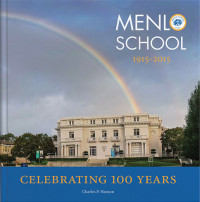 This lively history is full of alumni stories, memories of beloved faculty, photographs of people and places throughout the years, and an engaging narrative of Menlo’s 100 years, including such nuggets as the excerpts below.

Senior roommates Bill McPhaul and Bernie Pick ’66 sneaked out of the dorm the night before their graduation. Ever alert to such shenanigans, Fred “Derf” Halverson went into their room and removed both mattresses. After they sneaked back in at 3:00 am, Bill lay down on the exposed springs, and Bernie curled up on the floor for a few uncomfortable hours. Neither was sure what had become of their mattresses, but they found out at breakfast when Derf puffed on his cigar and inquired, “How’d you sleep, boys?”

Alluding to the drastic political changes sweeping across Eastern Europe as the Cold War hurtled to an unexpected close, Menlo President Rick Berthold memorably described the combined [School and College] institution as “an unnatural union, like Czechoslovakia.” It took a few years to achieve the so-called Velvet Divorce between the Czech Republic and Slovakia in 1993, and the process at Menlo proved even slower. The complex task of steering the School toward a new state of independence fell to Norm Colb.