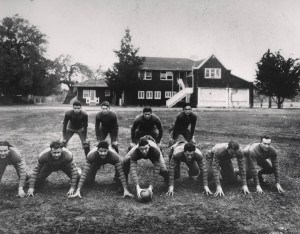 “Menlo was able to produce the best football team than it has had for a long time and by far the most successful in the history of the School. Under the able coaching of Harry (Gunner) Renwick, who turned out several championship teams for Hitchcock, our players, formerly coached under several different systems, were soon molded into a unisonant team. Captain De Sola greatly aided this course by being so efficient and ready to work, keeping up the spirit with a total score of 260 points to our opponents’ 6 points, the only score against us being made in one of our early games.” — Menlo Musketeer 1927 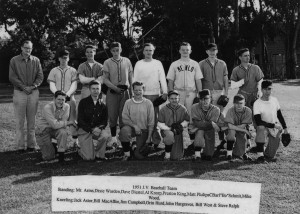 “The rag tag team played their hearts out. When we showed up, teams would sort of laugh and shuffle their feet, but by the ninth inning we would be laughing.” — David Diestel ’53 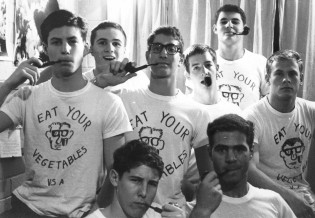 “Martyn Perry, the Latin and German instructor, was the subject of our group gathering, but I am sure, in retrospect, that we were actually ‘honoring’ Mr. Perry for doing his best to keep us on the straight and narrow path. His pipe smoking surely was intended to show us the folly of vice, and his insistence that we ‘eat our vegetables’ would have been to be sure he was guiding us to a good and healthy life.” — John Lubliner ’64 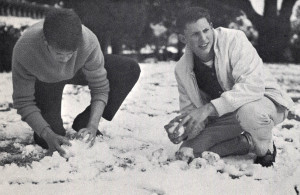 Snowfall is a rare event on the Peninsula and has been recorded as significant on only a few occasions in the last century. One of those spectacular years wsas 1962. In Palo Alto, between 1.5 and 9 inches of snow were recorded from the Bay to Skyline. Gary Miller ’62 and Forrest Sutterle-Newhall ’62 make use of the event to arm themselves for a snowball fight. 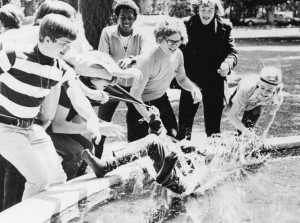 “The spring season of the year was definitely an active part of the year concerning school spirit. Mr. Bryant did a great job in organizing certain activities for the students. An underclassmen vs. senior weightlifting contest was held in April. The seniors showed up with only two lifters. Mr. Byrant purchased a trampoline and a golf net that proved to be the real highlights of the spring semester. However, school life was also frequented with dunkings in Douglass pond and continuous showers of water balloons. Overall, the spirit of the school improved immensely, and the students finally united together…” Oak Leaves 1972 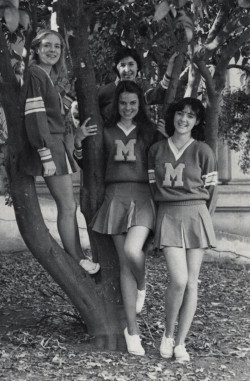 “The Menlo way was not your standard way. 1979 was the first year of girls being admitted to Menlo. As a group we were trying to add a bit of balance to the campus and its activities and sports. Nikki Hyde was the Dean of Women at the time. She encouraged us to do what we thought was needed. We thought we needed cheerleaders. As cheerleaders we did not have any traditions to follow nor did we really know all that we could do, so we had to figure it out. We kept it simple and cheered on the football and basketball teams along with creating some halftime shows. The formation of the first cheerleading squad sparked the boys to create their own, the Menlo Knightmares. As you can see, one small change lead to many other great traditions at Menlo.” — Lenka Davis ’83 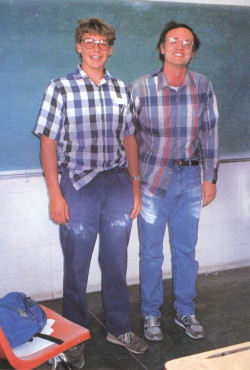 Nerd of the Month

“A couple years after I got here, in my calculus class, one student just made an amazing observation, the whole class was just stunned, and someone said, ‘Nerd of the Month!’ And so we all thought it was pretty funny that someone would get that ‘honor,’ but we actually did consider it an honor, because to us a nerd is someone who is just passionate about something…we’re proud to be smart and strange and care about something that other people don’t. One of the girls…created a citation for Nerd of the Month, and that started a tradition. Ever since then, it’s the greatest honor you could get. You could get to immortality at Menlo because we never take them down, so we have Nerds of the Month going back to the mid-nineties.” — Mike Thibodeaux, Computer Science and Math teacher 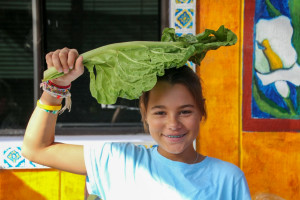 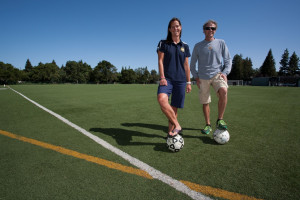 “The girls’ soccer team practiced on Cartan Field when I was a student. I remember the garlic smell that would come across the street from Fontana’s restaurant getting ready for dinner. It can be beautiful here, with the sun setting. Donoson will sometimes stop in the middle of practice and just tell the girls to take a look.” — Buffie Ward Williams ’89, Assistant Athletic Director and girls’ soccer coach