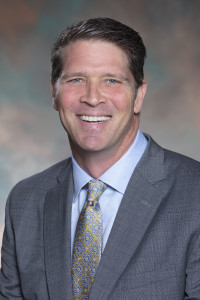 Than Healy became Menlo’s Head of School in July of 2013.

After graduating from Williams College, Than began his career in education at the Stevenson  School in Pebble Beach, CA, where he taught history and psychology and served in a number of roles in the life of the school. Continuing his collegiate athletic career, Than coached basketball and water polo and directed the summer athletic program. Stevenson honored Than with the  McNeely Chair for Outstanding Educator; he was the youngest faculty member to earn this recognition.

In 1995, Than took a yearlong hiatus from education to play professional basketball in Frankfurt, Germany. He then returned to teach at his own high school, Punahou School in Honolulu, HI. In 2001, he earned an MA in Educational Administration with a focus on private school leadership from the Klingenstein Center at Teachers College, Columbia University.

The Menlo School Board of Trustees is the guardian of the School’s mission. It is the Board’s responsibility to ensure that the mission is appropriate, relevant and vital to the community. The Board of Trustees is currently comprised of 30 individuals, elected for two three-year terms, and six ex officio members, all of whom monitor the success of the School in fulfilling its mission. Each Board member participates in and supports the mission of the School and serves on at least one of the Board’s committees: Buildings and Grounds, Development, Communications, Executive, Finance, Investment, and Leadership.